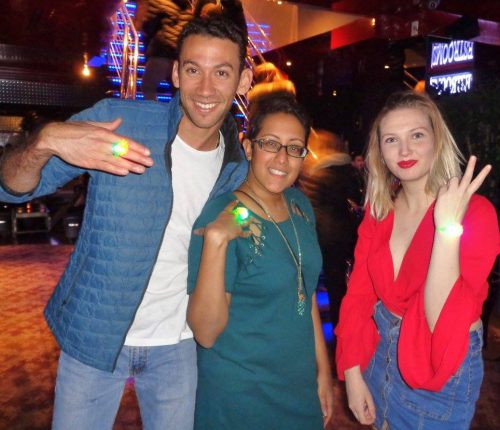 Looking for someone new and exciting to spend Valentine's Day with?

OR Want to enjoy a glass of wine with that special someone?

OR just want to have fun dancing the night away with friends both old & new?

If any of those options sounds good then please join us for the most innovative pre-Valentine’s Day party in NYC, our Ring Party!

Here’s how it works:

When you arrive you’ll have the option of taking a ring that can be set to flash.

TAKE A RING AND TURN IT ON: This will be a signal that you’re open to being approached by those who would like to get to know you better.

DON’T TAKE A RING: This says that you’re either not open to meeting someone new or are but would like to handle it on your own terms.

TAKE A RING & LEAVE IT OFF: If you’re not ready to be approached at this time but might change your mind later in the evening.

It’s as simple as that!

We will also feature:

*Dancing to all your favorite tunes with DJ Vinnie Campisi!

This private event space features a view of Fifth Ave & it's own entrance to 230 FIFTH's Rooftop Garden & has hosted events by numerous celebrities including, Taylor Swift & Brad Paisle.

The Rooftop Garden is a hot-spot in the summer and a not-to-be-missed winter experience with its heated outdoor Rooftop Garden and legendary hooded red fleece robes which are given to guests upon their arrival.
Since 230 FIFTH's opening in May of 2006: