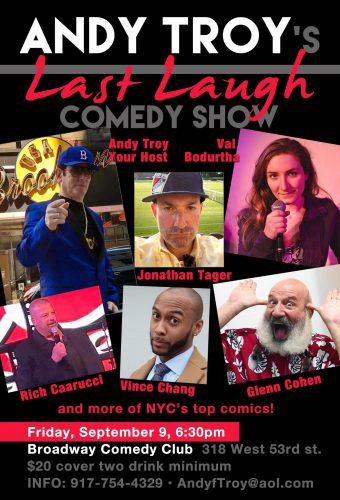 Your host for tonight has appeared on "The Tyra Banks Show", hosted an episode of "Cake Boss" & been the subject of Insight Film's TV pilot, "The Straight Goods". He was chosen for this year's Pocono Comedy Festival and clips of his live performances were recently shown in an episode of, "Transparent Film Festival".

Rich Carucci is a Second Generation Comedian following in the footsteps of his Grandfather a Vaudevillian Comedian. Rich is a former Childhood actor who appeared in several Chef Boyardee commercials as well as the Ed Sullivan show. After 25 years he’s a National Headliner who has shared the stage with Dave Attell, Jim Norton & Pete Davidson from SNL. He’s been labeled the modern-day Don Rickles. He has been seen on MLB.com and Featured in the NY Post. He appears regularly on Anthony Cumia’s Compound Media

Vince Chang, what is more to say than "Just Laugh". Jamaican Chinese heritage, a Blasian to most, has been conquering the comedy stage since College. Chang's style of comedy is vibrant and energetic. Chang has been seen on shows on TruTV, What's Eating Harlem, FoxSoul, and NBC . Chang's acting experience includes commercials for Citizens Bank, Bacardi, and a few short films and movies seen at multiple film festivals . FChang has performed stand up at legendary venues such as Webster Hall, Trocadero Theatre in Philadelphia, and has been a part of the New York Comedy Festival. You may also catch him at local clubs in New York City including Broadway Comedy Club, New York Comedy Club and more. When Chang steps on stage, entertainment is the philosophy and believes in his motto for people to "Take a Seat, Grab a Drink, and Just Laugh."

Val Bodurtha is a NYC-based comedian whose writing has been featured by McSweeney’s, The A.V. Club, Forbes, Vulture, Buzzfeed, and more. Her most recent screenplay won the Atlanta Film Festival and placed top ten at Francis Ford Coppola’s American Zoetrope Screenplay contest. Val also does stand-up, producing her own line of shows and opening for Jerrod Carmichael while undergrad at UChicago. Val's most recent film is the short mockumentary, "Wax Paul Now," featuring Paul Giamatti, which was accepted to the Miami Film Festival and AFI Fest, an Oscar-qualifying film festival.

Jonathan Tager is not native to anywhere really but has lived in NYC for 20 years. His quick wit and sharp humor about life’s stupid nonsense make him a must-see act. He has no material and makes it up as he goes. He produces shows around the city and at a theater near you.