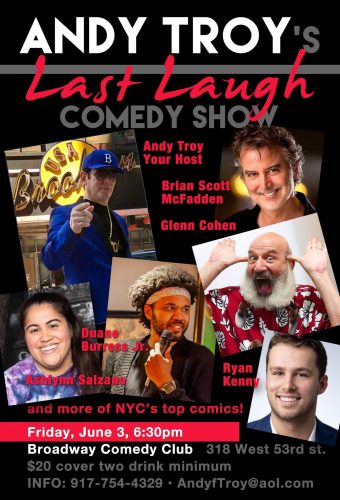 Actor/Comedian/ Brian Scott McFadden is one of the funniest stand up comics working in the industry today. After making his debut on The Late Show with David Letterman, Brian followed that up with another dynamic appearance on The Late Late Show with Craig Ferguson on CBS. A regular on the NYC comedy circuit, Brian has recently taken his act to a whole new level with his high energy performances & some of the most unique, incisive & hilarious routines around.

Duane Burress Jr. is a Bronx comic who has performed all throughout New York City just like everyone else. He is the founder and producer of DBJ Comedy.

Ashlynn Salzano is a stand-up comedian and podcaster in the city that never sleeps, but that doesn’t stop her from bringing the energy on stage every night! When she’s not wasting time playing video games, you can catch her as a permanent guest on “That Time of the WEEK” podcast, and performing all over the country. She’s been on Sirius XM, at the Hollywood Improv, Funny Bone Comedy Club, and recently performed in the Big Pine Comedy Festival.

Check out my performance from my sold-out show at the Broadway Comedy Club!