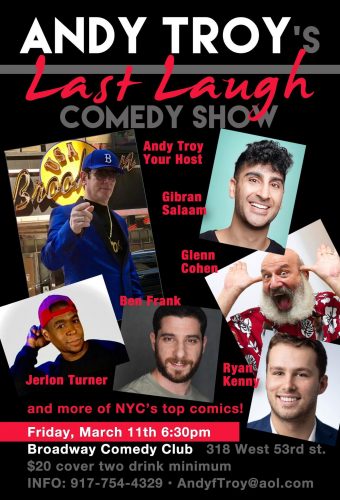 2021 was a challenge, but it's a New Year! We can all use some laughs, so please join me for my next Last Laugh Comedy Show at The Broadway Comedy Club!

Gibran Saleem is a comedian and writer that has been featured on MTV, TV Land, and Better Things on FX. He is a host of the hit podcast “Why Did I Say That?!” and currently wrapping his short film, GIBRANISTAN. He started comedy while attending graduate school at New York University for Psychology and now performs nationally as well as overseas where he performed in South Korea and Japan for the troops.

Glenn Cohen has been an Equity actor for over forty years, performing on stage with the likes of Cherry Jones, Tony Shalhoub and Stubby Kaye.
As a member of The Screen Actors Guild Glenn has been a “method extra” in over 300 major motion pictures.

Jerion Turner is a hilarious upcoming comic, born and raised in Queens, NY. He has appeared all over New York City; including; The Broadway Comedy Club, New York Comedy Club, and The Producers Club. He is sure to make you laugh with his raunchy often ridiculous style of comedy.

Check out my recent performance last at Absalom!

And here's my performance from my May 14th show at the Broadway Comedy Club!

***Reminder: All guests must provide proof of COVID vaccination.