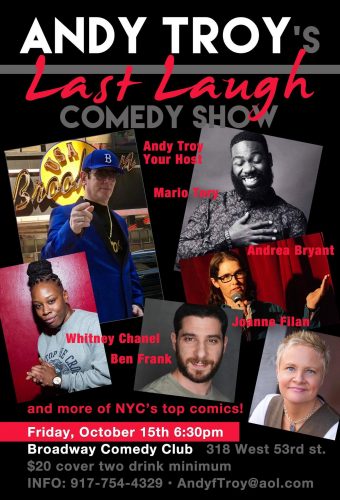 It's been a long and difficult year & I'm sure we can all use some laughs, so please join us for my next Last Laugh at The Broadway Comedy Club!

Mario Tory has become one of the most sought-after comedians in the country. Primarily known for his time as the Saturday night host at the world-renowned Uptown Comedy Center in Atlanta, this Tennessee native has opened for Sommore, Sid Davis, Don "DC" Curry, DL Hughley & Mike Epps. Mario has worked as a host, feature act & headliner at comedy clubs across the country.

Joanne Filan has been seen on Hulu, The Q on Fox, Amazon, Here TV, Armed Forces Entertainment, and at clubs and colleges nationwide.

Whitney Chanel is a New York City Comedian seen on Vh1, Bravo, Buzz Feed and The Sweet Spot. Her comedy takes you to a place where you can be your authentic self and hear your stories and life experiences through someone else.

You've seen her on The East Side Dave Show with Roy Harter on Compound Media, heard her on the Tom Shillue Show on Fox News Radio and she's opened for Angel Salazar. She can also deadlift 315 pounds!

***Reminder: as of September 1st all guests must provide proof of COVID vaccination.