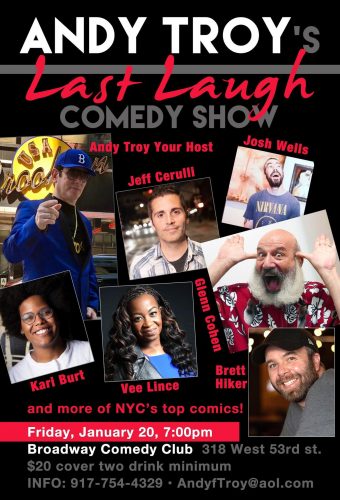 Your host for tonight has appeared on "The Tyra Banks Show", hosted an episode of "Cake Boss" & been the subject of Insight Film's TV pilot, "The Straight Goods". He was chosen for this year's Pocono Comedy Festival and clips of his live performances were recently shown in an episode of, "Transparent Film Festival".

Jeff Cerulli is a comedian and filmmaker that has been featured on MTV, the Bennington Show, Jim & Sam and as part of the Laughing Skull, Cape Fear and Everything is Terrible Festival.

His web series “The Feed’’ was released to critical praise. The Observer said “it hits too close to home.” His newest film, Tasteless, which takes a look at the popular dirty joke book series from the 80s “Truly Tasteless Jokes” is currently out via Virgil Films on Doc Plus

Vee Lince is a comedian from New York City and Long Island native. Her humble upbringing and immigrant background makes her a crowd favorite. In addition to becoming a regular at some of New York's finest clubs like New York Comedy Club, In 2018 she won the He said-She said Comedy Competition and has also graced the stage at some of the hottest shows for up and coming comics, from Nighttrain with Wyatt Cenac in NYC to The 1AM Secret show in Atlanta. While slanging her jokes across this great country, she's been featured at a few of America's funniest comedy festivals including Women in Comedy Festival and recently appeared at the Treefort Music Festival in Boise, ID. Catch up with all the funny and other fun stuff over at vlincecomedy.com

Kari Burt is an up and coming stand up comedian from Houston, Texas. Her standup revolves around personal stories and insightful takes on current society. Kari has opened for acts such as River Butcher, Shane Torres, and Erik Griffin. When she's not writing you can find her working her day job, stay-at-home wife.

Brett Hiker was a regular guy until twelve years ago when he was bitten by a stray comedian. Since, Hiker has spent the last decade telling jokes in theaters, clubs, and music venues across North America. He is an avid fan of dive bars, legos, large dogs, soft drugs, snowstorms, carharts, whiffle ball, Toaster Strudels, silly hats, drinking in public, vintage hockey teams, pillow forts, day drinking, breakfast food, and nothing else. Although Brett was raised by a pack of mountain folk in Colorado, he now lives and tells jokes in NYC where against his will he gets meaner and funnier by the day.