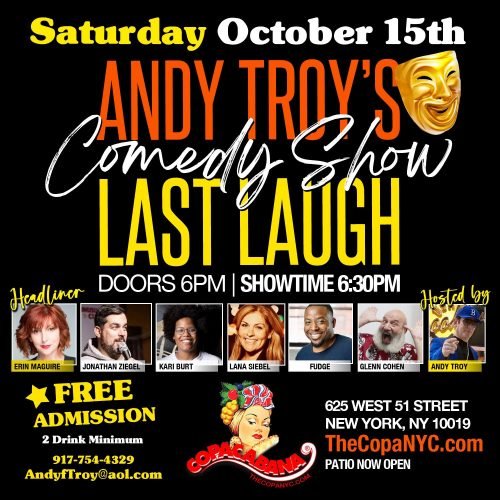 We can all use some laughs, so please join me for my next Last Laugh Comedy Show at The Copacabana!

This will give you time to meet your fellow group members!

Your host has appeared on "The Tyra Banks Show", hosted an episode of "Cake Boss" & been the subject of Insight Film's TV pilot, "The Straight Goods". He was chosen for this year's Pocono Comedy Festival and was recently featured in an episode of, "Transparent Film Festival".

Erin Maguire is a New York City based stand-up comic, actor, writer, podcast host, and all-around good time gal. She’s been seen on Gotham Live, ESPN, and the Game Show Network. Erin has written for the Comedy Central Roast, Norwegian Cruise Lines, and created The Seinfeld Board Game and content for the Netflix board game with Spinmaster Games. Her comedy advice podcast, Dear Pod, has been featured on Apple’s Top100 Comedy Pods and she has been featured at the Woodstock Comedy Festival, Women in Comedy, Laugh Your Asheville Off, and the prestigious Lucille Ball Comedy Festival for the grand opening of the National Comedy Center.

Erin appears nightly at clubs in NYC. Her debut comedy album, “Baseline Presentable,” with Laugh Button Records will be available on Sept. 13th.

She wants you to buy it. She’s got two puppy mouths to feed.

Lana Siebel is a New York City based comedian who has been headlining shows across the United States. Recently, she performed at Bananas Comedy Club (New Jersey), Atlantic City Comedy Club (Atlantic City, New Jersey), The Howlin’ Wolf (New Orleans, Louisiana) Fairfield Comedy Club (Fairfield, Connecticut) Caroline’s Comedy Club (NYC) Punch Line Comedy Club (Philadelphia, Pennsylvania) Sunrise Theater (Fort Pierce, Florida) . You can catch her regularly in New York City at Broadway Comedy Club, The Tiny Cupboard, The Comedy Shop, Greenwich Village Comedy Club and Eastville Comedy Club. Lana has also acted in many independent films such as the Businessman currently streaming on Amazon Prime. In a former life she was ranked 7th in the United States in International Latin Ballroom Dancing. Her family is happy she is out of the house.

Glenn Cohen has been an Equity actor for over forty years, performing on stage with the likes of Cherry Jones, Tony Shalhoub and Stubby Kaye.
As a member of The Screen Actors Guild Glenn has been a “method extra” in over 300 major motion pictures.
And as a Stand Up Comedian, Glenn has regularly appeared at The Original Improvisation, Mohegan Sun Casino, Taj Mahal Casino, Stand Up NY, Comic Strip, Dangerfield's, Webster Hall, The Cutting Room and Broadway Comedy Club. Despite the obstacles, Glenn still hopes to fulfill his lifelong ambition of becoming a child star.

Originally from Long Island, NY, John Rickenbacker Jr. Is a popular American television and media personality, actor, and comedian who is widely known for his unique style of comedy. He has performed with the greats Tracy Morgan, Keenan Thompson, and Pete Holmes. This 4x Mcdonald’s Fest Comedy winner has an impressive resume including, starring roles on HBO Crashing, Hulu’s Wu-Tang an American saga, and National Commercials ( Credit Karma)
John continues to electrify the masses at events all over the world while making sure that everyone he encounters “Feel the F.U.D.G.E. Experience.”

Jonathan Ziegel is a touring standup comic, from New York City, whose comedy details his experiences growing up, dating, working and... well, anything else that strikes a cord. His humor has been described as wry, witty, stylish and endearing. Jonathan’s jokes typically involve a range of physical motion that eliminates his need to go to the gym. He’s delighted audiences across NYC, PA, DC, Memphis, Myrtle Beach, Portland, Seattle, Toronto, Edinburgh and Paris, where he's known as "Le Big Deal" by extended family. He's also a Festival favorite, having performed in the Comedy Mob, Free Standup NY, Portland and Poconos Comedy Festivals. You can find him on FB at Jonathan Z Comedy and IG at @The_Real_JZ_

Kari Burt is an up and coming stand up comedian from Houston, Texas. Her standup revolves around personal stories and insightful takes on current society. Kari has opened for acts such as River Butcher, Shane Torres, and Erik Griffin. When she's not writing you can find her working her day job, stay-at-home wife.